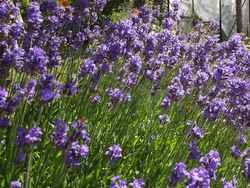 Lavender has often been used as a calming agent for anxiety, and to help with the onset of sleep. By studying mice, a team at Kagoshima University, Japan, has now confirmed the identity of the relevant component of lavender oil and its mechanism of action. The anxiolytic (ie anxiety-reducing) chemical is one of the terpene alcohols in lavender, called linalool. Moreover, the researchers established for the first time that linalool must be smelt in order to produce its calming effect, as opposed to being absorbed in the lungs or taken up by the bloodstream.

The team say their findings may lead to the clinical application of linalool odour for anxiety disorders and to alleviate preoperative stress.

Follow
This entry was posted in Stress & Anxiety. Bookmark the permalink.