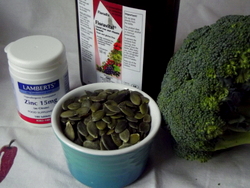 Researchers in the US have uncovered an association between higher intakes of dietary iron and reduced incidence of pre-menstrual syndrome (PMS). They followed 3000 women over a ten year period, assessing their mineral intake using dietary questionnaires at three points over that interval. Women with the highest iron intakes had a 30-40% lower risk of developing PMS, compared with women consuming the least. Moreover, it was consumption of so-called non-haem iron, which is found primarily in plant foods and dietary supplements, which was important. Risk of PMS appeared to lower once consumption exceeded around 20 mg per day. The study’s authors caution against exceeding 45 mg per day. They speculate that iron may be important to prevent PMS because it is required for serotonin production, which in turn regulates mood.

Zinc intakes greater than 15 mg per day were also associated with lower risk of PMS. A high potassium intake however, was associated with an elevated risk of PMS, perhaps because it has a role in regulating fluid balance in the body, and so may be linked with fluid retention pre-menstrually.

Follow
This entry was posted in Gynaecology. Bookmark the permalink.