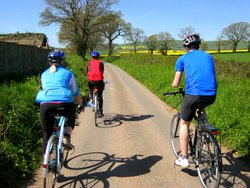 Researchers at the University of Birmingham and King’s College London have found that staying active keeps the body young and healthy. They set out to assess the health of older adults who had been active most of their adult lives to see whether exercise slows down ageing.

The study recruited 125 amateur cyclists aged 55 to 79, 84 of whom were male and 41 were female. The men had to be able to cycle 100 km in under 6.5 hours, while the women had to be able to cycle 60 km in 5.5 hours. Smokers, heavy drinkers and those with high blood pressure or other health conditions were excluded from the study. Participants underwent a series of tests, and were compared to a group of adults who did not partake in regular physical activity. This group consisted of 75 healthy people aged 57 to 80 and 55 healthy young adults aged 20 to 36.

As expected, the study showed that loss of muscle mass and strength did not occur in those who exercised regularly. The cyclists also did not increase their body fat or cholesterol levels with age and the men’s testosterone levels remained high. More surprisingly though, the study revealed that the benefits of exercise extend beyond muscle as the cyclists had an immune system that did not seem to have aged either. An organ called the thymus, which makes immune cells called T cells, starts to shrink from the age of 20 and makes fewer T cells. In this study however, the cyclists’ thymuses were making as many T cells as those of a young person.

Professor Janet Lord, Director of the Institute of Inflammation and Ageing at the University of Birmingham, said, “Hippocrates in 400 BC said that exercise is man’s best medicine, but his message has been lost over time and we are an increasingly sedentary society. Our research means we now have strong evidence that encouraging people to commit to regular exercise throughout their lives is a viable solution to the problem that we are living longer but not healthier.”

Norman Lazarus, Emeritus Professor at King’s College London and Dr Ross Pollock, who undertook the muscle study, suggested, “Find an exercise that you enjoy in whatever environment that suits you and make a habit of physical activity. You will reap the rewards in later life by enjoying an independent and productive old age.”

Major features of Immunesenescence, including Thymic atrophy, are ameliorated by high levels of physical activity in adulthood. Aging Cell, 8 March 2018.)