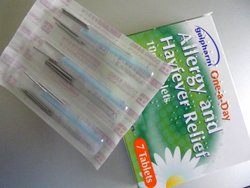 Results of a pilot study carried by University Hospital Dresden in Germany, suggest acupuncture may be as effective as antihistamines in patients suffering from allergic rhinitis induced by house dust mites. A total of 24 such patients were treated for three weeks with either acupuncture or loratadine, a commonly-prescribed antihistamine. Patients were interviewed again at follow-up ten weeks after treatment. On the basis of patients’ subjective assessments, both treatments were considered effective, but the beneficial effects of acupuncture tended to be assessed as more persistent after treatment had ended.

The researchers conclude acupuncture is a clinically effective therapy in the treatment of persistent allergic rhinitis. The results indicate the probability of an immunomodulatory effect.

(The effectiveness of acupuncture compared to loratadine in patients allergic to house dust mites. Journal of Allergy, 5 June 2014. http://www.hindawi.com/journals/ja/2014/654632/)