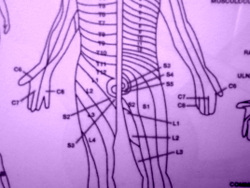 Researchers in Turkey have found that acupuncture is a promising treatment option for the management of radicular pain (pain radiating in recognised patterns through the body indicative of pressure on specific spinal nerves at intervertebral disc level). They concluded it is non-invasive and with minimal side-effects.

Eighty patients (43 women and 37 men) with acute radicular pain of either lumbar or cervical (neck) origin, were randomly assigned to receive either nonsteroidal anti-inflammatory drugs (NSAIDs), or acupuncture. Half the group had lumbar disc herniations and half had cervical disc herniations, all diagnosed by NMR or CT scan. The NSAID administered was Tenoxicam plus another drug to protect the stomach from possible side-effects of the NSAID.

(Effectiveness of Acupuncture with NSAID Medication in the Management of Acute Discogenic Radicular Pain: A Randomised Controlled Trial. Journal of Anesthesia and Clinical Research, March 2012.)