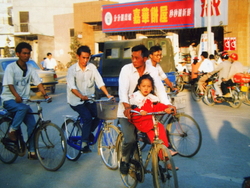 A study of Chinese earthquake victims suggests that electroacupuncture is more effective than anti-depressants for treating the symptoms of post-traumatic stress disorder (PTSD). Researchers identified 138 people who were suffering symptoms as a result of experiencing a magnitude 8.0 earthquake on the Richter scale, in May 2008. They randomly allocated people to receive either electroacupuncture treatment or anti-depressant medication (paroxetine). After treatment, both groups reported reduced symptoms, but the improvements in the electroacupuncture group were significantly greater, at all time points in follow-up to six months.