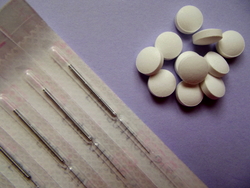 A pragmatic randomised controlled trial conducted by the Medicines Research Group at the University of East London, has found that patients with depression benefit more when they receive acupuncture in addition to taking SSRI antidepressant medication. (SSRIs include citalopram, fluoxetine, Prozac and seroxat.) A total of 76 patients were randomly allocated to one of two groups: one group was given an SSRI but also received acupuncture, whilst the other group was only given the SSRI. Baseline depression scores for the two groups were 22.2 and 22.1 respectively.

(Acupuncture combined with an antidepressant for patients with depression in hospital: a pragmatic randomised controlled trial. Acupuncture in Medicine, 29 April 2014, epub ahead of print.)