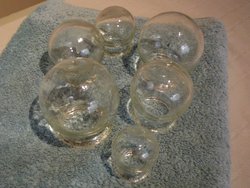 Since this summer’s Olympics, and those widely publicised photos of Michael Phelps, many people have asked me about cupping therapy. In particular, is there any research evidence to support its use? It’s been practised by acupuncturists for centuries alongside their needling, but it’s only in recent years that it has really captured public interest. Most of the attention has been on sportsmen and women, but I am likely to offer cupping to anyone with muscle tension eg tight back or shoulders. 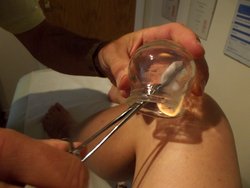 Firstly, how is it done? I momentarily burn a small alcohol swab inside the purpose-made thick glass cup. This burns off the oxygen so that if the cup is then quickly applied to the skin, you can preserve the partial vacuum you have created, and the cups sticks. In doing so, it draws the tissue up into the cup and stretches the tight muscle. I warn patients it might leave a mark for a few days, though I have to say, it’s not usually as strong as the marks that have been photographed this summer. Cups come in different sizes, so we choose one appropriate to the area, and cupping strength can be varied. I usually leave them on for three to four minutes.

Secondly, what evidence is there for its effectiveness when used for muscle aches and pains in sport? Well elite international athletes and their coaches are unlikely to be using cupping therapy if they haven’t noticed worthwhile benefits, but several research papers have been published too. 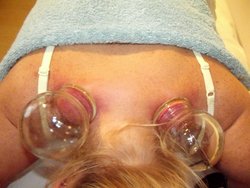 In a randomised controlled trial undertaken by Taiwanese researchers and published this year, 60 patients with neck and shoulder pain received either cupping or no treatment. Neck pain intensity in the cupped group decreased by 6 points on a 10 point scale, whilst it remained unchanged in the control group. Cupping also reduced blood pressure. The authors say that their findings strongly suggest that cupping is effective for relieving pain, with no adverse effects, and that it has the potential to eliminate reliance on analgesics and reduce health care costs.

In a 2013 study by a German team, 61 patients with chronic neck pain were randomised to receive 12 weeks of either cupping or progressive muscle relaxation. Both groups had similar, clinically relevant reductions in subjective pain reports compared to baseline, but cupping performed significantly better in terms of increased wellbeing and decreased objective pain thresholds. 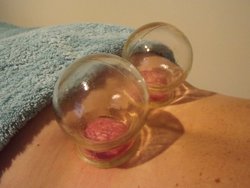 Small pilot studies have been performed in the US and Germany, looking at cupping for lower back pain and osteoarthritis of the knee respectively. Significant improvements were found in perceived lower back pain and there was greater range of movement. The authors stated, “Chinese cupping may be a low-risk, therapeutic treatment for the prompt reduction of symptoms associated with subacute and chronic low back pain. Cupping may allow patients to progress to functional movement training in a timely manner by promptly reducing pain and muscle tenderness and improving range of motion.”

In Germany, knee pain, stiffness and function improved significantly after four weeks of cupping, and these improvements persisted at 8 week follow-up. Further, researchers in India found the effects of cupping on the symptoms of knee osteoarthritis, were comparable with those of paracetamol, and with minimal side effects compared to the drug.

A very comprehensive review of the evidence to support the use of cupping therapy for musculoskeletal pain, was published in 2015. If you have a clinical background, then this along with Arya Nielsen’s paper on gua sha (Chinese scraping therapy), look in detail at the neurobiological mechanisms which may be at work in cupping.

Finally, you may see mention of “wet cupping” or references to the skin being cut prior to a cup being placed over the area. For health and safety reasons, that is not something that a member of the British Acupuncture Council will do. We only cup over unbroken skin.