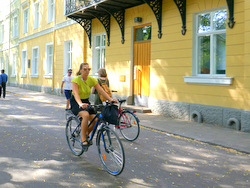 A new study on cycling and health undertaken across seven European cities reveals that it is the mode of transport associated with the greatest health benefits. Cyclists experience better self-perceived general health and better mental health.

The study was carried out in Antwerp, Barcelona, London, Örebro, Rome, Vienna and Zurich. A baseline questionnaire was completed by more than 8800 people, 3500 of whom also completed a final survey, on transport modes and perceptions of general health. The survey included questions on anxiety, depression, loss of emotional control, psychological well-being, vitality and perceived stress. The transport modes assessed were car, motorbike, public transport, bicycle, electric bicycle and walking.

Research in 2016 looked at the impact of cycling for commuting and recreation, on the risk of developing type 2 diabetes. In this cohort study of Danish adults aged 50 to 65, those who reported higher weekly cycling mileages were less likely to develop diabetes; the effect was more pronounced in those who cycled to work.

Perhaps most interesting though was that those who took up cycling after the study began, also had a lower risk of developing diabetes than those who did not cycle. This suggests that it is not too late to access the benefits of cycling, even in the years approaching retirement.