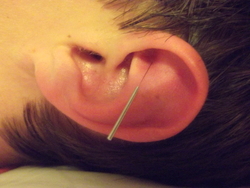 Researchers in Italy have conducted a randomised controlled trial looking at the effect of ear acupuncture (use of known acupuncture points on the ear, as opposed to the rest of the body), to treat acute migraine attacks.

A total of 94 female migraine sufferers were treated during an acute attack. They were randomly divided into two groups: group A were given ear acupuncture at points commonly used by the profession to treat migraine, whilst group B were given ear acupuncture at points which would not customarily be used. Patients in group A reported a significant reduction in pain scores at 10, 30, 60 and 120 minutes after insertion, whereas no significant decrease was observed among patients in group B.

(Ear Acupuncture in the Treatment of Migraine Attacks: A Randomised Trial on the Efficacy of Appropriate versus Inappropriate Acupoints. Neurol Science, May 2011.)