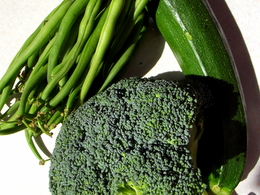 A study carried out in China, has shown that eating more vegetables is associated with lower mortality rates, particularly from heart disease. The strongest protective effects seemed to come from higher consumption of cruciferous vegetables (also known as the brassica family), which include broccoli, kale, cabbage, cauliflower, radish and turnip.

Nearly 135 000 people participated in the study. Overall, the greater an individual’s fruit and vegetable consumption, the lower their risk of death, especially from cardiovascular disease. People whose diets included the most vegetables, were 15% less likely to have died during the five year study. Although benefits were observed in both men and women, in women in particular, the risk of dying was 22% lower in those who ate the most cruciferous vegetables compared to those who consumed the least.