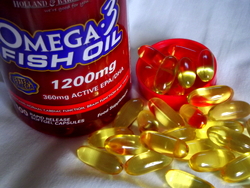 Researchers in Auckland, New Zealand, have found that supplementing the diet with DHA, improves both memory and reaction time in healthy young adults who habitually had a low intake. DHA is found in oily fish such as salmon, and is already known to accumulate in areas of the brain associated with memory and attention.

A total of 228 people (83 men and 145 women), aged 18 to 45, were recruited and randomly allocated to take either 1.16g of DHA per day, or a placebo capsule, for six months. The DHA dose was chosen to equate to two to three portions of oily fish per week. Assessment of the 176 individuals who completed the trial, showed improved memory and memory reaction times. Interesting differences also emerged between the sexes: in women, the accuracy of episodic memory (long-term memory associated with specific events in life) improved, whereas in men, the reaction time of working memory (short-term memory to help us execute a task) improved.