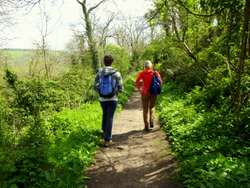 A study of professional baseball players has shown that the benefits of building strong bone during youth, can last a lifetime. The research also confirmed that continued physical activity can help in maintaining bone strength as we age.

Researchers at Indiana University recruited more than a hundred baseball players at different stages of their careers. Baseball players have an internal control for such a study: their throwing arms are exposed to repeated loads, while their non-throwing arms are not. They also usually retire from throwing activities once they stop professional play. This allowed assessment of the effects of physical activity long after the players’ left and right arms had settled into becoming subject to similar daily loading. Almost a hundred age-matched controls were studied for comparison.

The researchers focused on the humerus, the bone of the upper arm, and used CT scans and dual-energy X-ray absorptiometry (DXA) to measure bone size and density. They found that the loads on the throwing arms caused the bones there to nearly double in strength, extra bone having formed on the outer surface of the humerus. Compared to humeral bones in non-throwing arms, those in throwing arms had about 50% greater mass, size (total cross-sectional area), and thickness.

After retirement, these bone mass benefits from throwing were gradually lost. Bone loss during aging however, occurred mostly on the inside of bones rather than the outside. Because of this pattern of bone loss, about half the bone size benefits of physical activity during youth and one-third of the bone strength benefits were maintained lifelong. Players who continued throwing as they aged, experienced less bone loss on the inside of the bone and maintained even more of the strength benefits.

The researchers conclude that exercise during youth adds extra layers to the outer surface of a bone to essentially make the bone bigger, and since bone loss during aging predominantly occurs on the inside rather than outside of a bone, the bigger bone generated by physical activity when young is an enduring means of keeping the skeleton stronger.