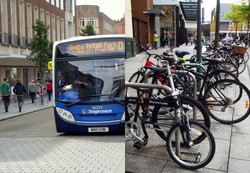 Researchers at the London School of Hygiene and Tropical Medicine have found that commuters who travel to work by walking, cycling or public transport, have a significantly lower body mass index (BMI) and percentage body fat, compared with those who use private transport (predominantly the car, but also taxi, moped and motorbike).

A total of 15 777 people were included in the study. Factors such as age, disability, diet quality, participation in sport, and physical activity in the workplace, were all allowed for in anticipation that they might affect any association between commuting mode and obesity. Men who commuted via public or active transport modes were found to have BMI scores respectively 1.10 and 0.97 lower than those using private transport. For women, the corresponding figures were 0.7 and 0.87.