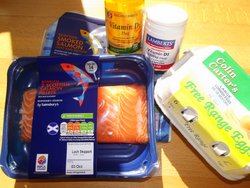 There is one supplement you should consider taking from this point in the year: vitamin D. Last summer, Public Health England issued new advice that all adults, and children over the age of one, should get at least 10 micrograms of vitamin D per day. Vitamin D is found in oily fish eg salmon, red meat, liver and egg yolks. It can also be found in fortified foods such as breakfast cereals. It’s difficult however to get the recommended amount of vitamin D from diet alone, and our main source is from the action of sunlight on our skin. From October to the end of March, sunshine in the UK is too weak to achieve this, and we are largely covered up and/or indoors anyway, so these are the months in which it is particularly important to consider a supplement.

It’s relatively cheap too: checking today, you can buy 3 months supply in Exeter High Street for £3-59.

It is accepted that vitamin D is needed for healthy bones, teeth and muscle. There may also be associations (although causality has not been established) between low vitamin D status and a host of other conditions such as dementia, cancer, cardiovascular disease, and autoimmune disorders such as multiple sclerosis, rheumatoid arthritis and some thyroid problems. This year, two separate studies from Australia have linked vitamin D deficiency in pregnancy with autism, and deficiency in childhood with allergic disorders such as asthma and eczema. It is a vitamin about which we still have much to learn.