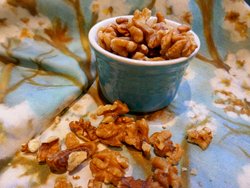 Researchers at Pennsylvania State University looking at walnuts and the gut biome, have found that eating walnuts daily as part of a healthy diet, leads to increases in certain beneficial gut bacteria associated with improvements in some risk factors for heart disease. Forty-two adults aged 30 to 65 and already identified as at risk from cardiovascular disease, were put on randomised, crossover diet trials. For the first fortnight, they consumed a standard western diet. There then followed three different six week diets to test the effects of walnuts. The walnut diet included 57 to 99 grams per day of whole walnuts. Faecal samples were collected to analyse gut bacteria.

The team found that after the walnut diet, there were significant associations between changes in gut bacteria and risk factors for heart disease. Eubacterium eligens was inversely associated with changes in several different measures of blood pressure, suggesting that an increase in Eubacterium eligens was associated with reductions in those risk factors. Additionally, greater numbers of Lachnospiraceae were associated with reductions in blood pressure, total cholesterol, and non-HDL cholesterol.

Kristina Petersen, assistant research professor, said “Replacing your usual snack, especially if it’s an unhealthy snack, with walnuts is a small change you can make to improve your diet. Substantial evidence shows that small improvements in diet greatly benefit health. Eating two to three ounces of walnuts a day as part of a healthy diet could be a good way to improve gut health and reduce the risk of heart disease.”