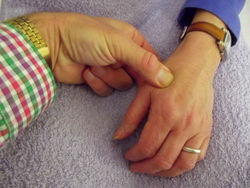 Acupressure in labour applied at a point on the hand, has been shown in a randomised controlled trial to reduce the pain and duration of the process. The point, known as Hegu or LI-4, is traditionally used by acupuncturists to promote birth and assist with labour pain.

One hundred women were randomly divided into two equal groups. The first group received acupressure at Hegu for the duration of each uterine contraction, over a period of twenty minutes. The second group received only touch at this point, with no massage. The two groups displayed significant differences in labour pain scores both immediately, and at 20, 60 and 120 minutes after the intervention. Additionally, active phase duration (3-4cm dilation to full dilation) and second stage duration, were shorter in the acupressure group. This group also reported greater satisfaction with their care.

The researchers conclude that acupressure at Hegu was associated with labour of decreased pain and duration, greater satisfaction for the women involved, and without any adverse effects being noted.

(Effects of LI4 Acupressure on Labour Pain in the First Stage of Labour. Journal of Midwifery & Womens Health, 2 March 2012.)