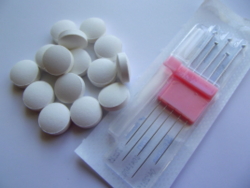 Researchers carrying out a systematic review of clinical trials on acupuncture for post-traumatic stress disorder, have found promising evidence for its effectiveness. Four randomised, controlled trials and two uncontrolled trials were included in the review.

Where SSRI anti-depressant therapy is concerned, the researchers point out that during long-term SSRI therapy, the most troubling adverse effects can include sexual dysfunction (2 to 7% of patients), weight gain (average 10.8 kg for paroxetine), and sleep disturbance. Conversely, for acupuncture, mild adverse events such as bleeding and bruising, occurred at a rate of 6.8% (2,178 out of 31,822 sessions). According to two studies, no serious adverse events were reported in a total of 66,229 acupuncture sessions. Therefore for long-term therapy, acupuncture may be a relatively safe alternative to SSRIs.