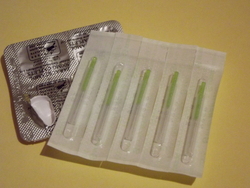 A randomized, controlled trial carried out by Chinese researchers, suggests acupuncture can both speed up response to selective serotonin reuptake inhibitors (SSRIs), and prevent symptom aggravation, in patients with major depressive disorder. Examples of SSRIs include citalopram, fluoxetine, prozac and sertraline.

In the six week study plus four week follow-up, 160 patients were randomly allocated to receive either paroxetine alone, or paroxetine plus 18 sessions of manual or electro-acupuncture. From weeks one to six, the addition of either form of acupuncture produced significantly greater reductions in depression scores at most time points compared with the drug alone: clinical response rates rose to 70% with acupuncture, versus 42% for paroxetine alone. The proportion of patients requiring an increased drug dose due to symptom aggravation, ranged from 6 to 9% for acupuncture, compared with 23% for paroxetine alone. Four weeks after completion of acupuncture treatment, patients in the electro-acupuncture group continued to exhibit significantly greater clinical improvement, suggesting a long-lasting enhancement of the drug’s effects.