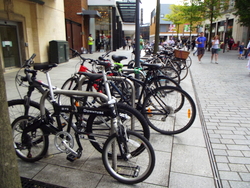 Research by the University of Utrecht in Holland, shows that Dutch cyclists live on average six months longer than their non-cycling counterparts. This feeds through into 6500 fewer deaths per annum.

The study made use of a new computational tool developed by the World Health Organisation. It revealed that for every hour spent cycling, people live an average one hour longer. For the average Dutch person, who spends 75 minutes per week on their bike, that equates to living six months longer. Researcher Dr Carlijn Kamphuis says,”This is important information to convince policy makers about the significance of promoting cycling measures. The figures speak for themselves. An investment in better cycle paths, for example, is easily recovered through the enormous health benefits and potential financial savings.”