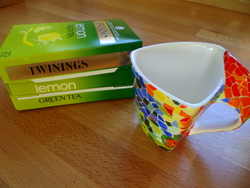 In a large study undertaken on the Japanese population, higher levels of green tea consumption have been found to be associated with a lowered risk of both cardiovascular disease, and stroke of all types. A similar association was found for coffee.

When it came to coffee, at least one cup per day seemed to be associated with a reduced risk of cardiovascular disease and all strokes. However, the researchers point out that more work needs to be done on the coffee association because other research suggests different sub-groups of the population might experience different effects.

(The Impact of Green Tea and Coffee Consumption on the Reduced Risk of Stroke Incidence in Japanese Population. Stroke:Journal of the American Heart Association, 2013.)

If you have never tried green tea before, then do experiment with different brands: it is a subject as wide as wine, so do not conclude you don’t like it on the basis of just one box. Never let the kettle boil completely: water at about 80 degC is preferable as it will not scald the tea. Finally, do not leave the tea to stew for more than a minute or two. If you like it, you have found a drink very high in antioxidants and polyphenols, which are thought to lend the tea its anti-inflammatory and anti-cancer properties. – Robin