A small UK-New Zealand exploratory study suggests a trend of increased benefits after ten sessions of adjunctive acupuncture for lower back pain of a chronic nature. A total of 45 patients were randomly allocated to receive usual care plus either four, seven or ten acupuncture treatments. Outcome measures including back function, pain and disability, suggested that at the 12 week point, the 10 session group experienced most benefit. Over 90% of the study participants felt “very satisfied” &/or “extremely satisfied” with acupuncture treatment.

The American College of Physicians has developed a new guideline to present the evidence and provide clinical recommendations on non-invasive treatment of low back pain. The guideline is based on a systematic review of randomised, controlled trials and systematic reviews published up to April 2015, on non-invasive pharmacological and non-pharmacological treatments for lower back pain.

For chronic lower back pain, a strong recommendation is made to doctors and patients to initially try acupuncture among other treatments. Also recommended are exercise, tai chi and yoga.

(Noninvasive Treatments for Acute, Subacute, and Chronic Low Back Pain: A Clinical Practice Guideline From the American College of Physicians. Annals of Internal Medicine, 4 April 2017.) 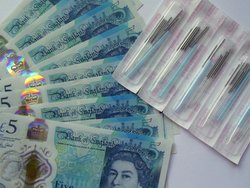 A systematic review by UK authors suggests that acupuncture represents a cost-effective and drug-free option for the treatment of lower back pain. Analysis of four studies showed that although acupuncture was associated with slightly increased costs, incremental cost-effectiveness ratios remained sufficiently low, and below the frequently used threshold value of £20 000 per quality-adjusted life year.

The National Institute for Health and Care Excellence (NICE) has selected this review for inclusion in NICE Evidence Search because it meets the definition of a reliable systematic review for this service.

A systematic review and network meta-analysis undertaken by researchers at the University of Huddersfield, has compared the effectiveness of various treatments for sciatica. The conclusion is that acupuncture is effective for sciatica. The work was funded by the National Institute for Health Research.

A total of 122 relevant studies, of which 90 were randomised controlled trials, covering 21 different treatment strategies were examined. Taking overall recovery as the main outcome criterion, and compared with inactive control or conventional care, there was found to be statistically significant improvement following acupuncture, disc surgery, epidural injections, non-opioid analgesia and manipulation.